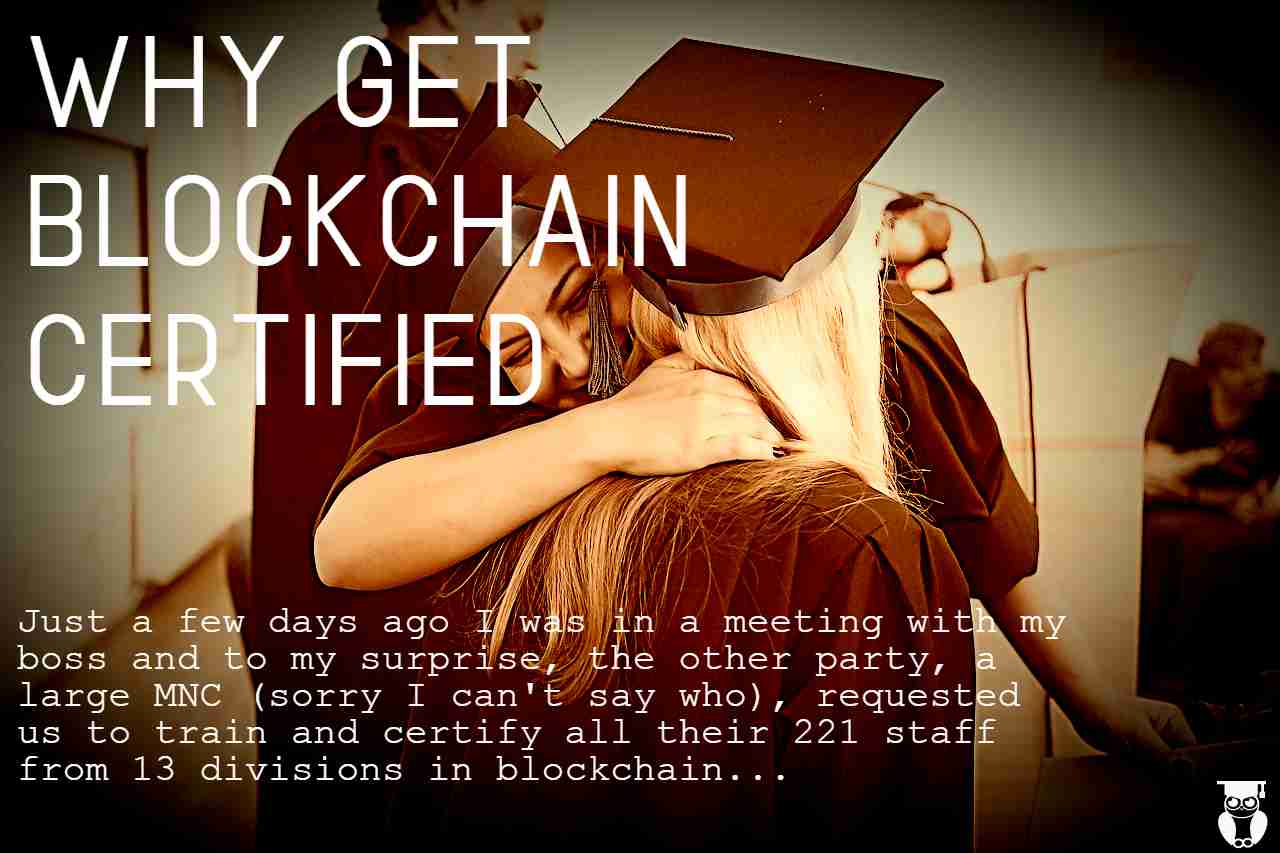 Just a few days ago I was in a meeting with my boss and to my surprise, the other party, a large MNC (sorry I can’t say who), requested us to train and certify all their 221 staff from 13 divisions in blockchain.

Oh wow! I’m still trying to grasp the magnitude of the task. 🙂 But common on! If this is not proving the demand for certified experts then I don’t know what is.

According to a recent Economic Times report,

“Salary offered to a blockchain techie with just five years of experience is almost at a par with that of a general manager in a bank with three decades of experience,” said Lohit Bhatia, chief executive, staffing, IKYA Human Capital Solutions, an HR solutions provider.

IKYA currently has 20 blockchain search mandates from banks and NBFCs.

Apparently, ICICI Bank currently uses blockchain for both domestic trade and remittances transactions. This is being scaled up quite a bit in the last several months. According to TK Srirang (Head of Human Resources, ICICI Bank), said…

“Since blockchain is an emerging area both in terms of practice and availability of skill, capability and skilling are largely being developed in-house through continuous training and global exposure in this space.”

The main areas or industries that are willing to pay such high salaries also vary. Banking and finance taking the top spot for highest investments put forth. Other industries such as shipping, rights management and health aren’t taking a back seat either.

‘Big boys’ like Microsoft, Facebook and Google have been pouring in top dollars and man hours building the next world class DApp (decentralized application).

Blockchain as a service (BAAS) is also being offered by IBM and ConsenSys. Banks are directly working with home loan and mortgage departments to place the entire home mortgage loan process onto the blockhain via smart contracts to eliminate fraud and increase processing time. Right now, a few banks in it have brought the entire mortgage process down to few hours compared to weeks.

Other areas using blockchain is the hospitality and entertainment industries, where they have begun tracking hotel reservations, travel agents, hotel bookings. Even the shipping industry is not being spared with large cargo shipments being recorded and tracked using blockchain.

Blockchain is certainly at the forefront of fourth industrial revolution or better known as Industry 4.0. Decentralized applications and smart contracts will probably someday replace a lot of key staff and therefore job seekers must embrace and get prepared.

Where are the jobs?

If you searched the term “blockchain” on Indeed.com, you’ll find close to 50 open positions that need to be filled in Malaysia right now!

In Singapore, blockchain related vacancies are hitting close to 270. In Indonesia they need close to twenty blockchain experts. And that’s just the tip of the iceberg, honestly. In  time to come, there are going to be more and more companies seeking ‘blockchain developers’ and blockchain experts to fill in various positions within the organization.

DID YOU KNOW?
The average salary of a blockchain engineer in Silicon Valley is $158,000, programmers who have experience in Solidity (language for creating smart contracts) is in short supply and high demand. (Source: Forbes.com)

But here is the thing, you don’t need to be a techie to get involved in this space. Non-tech workers are now required to understand basic blockchain functions such as the role of smart contracts in executing business functions, cryptography in providing security, and mining in transaction processing. As a marketer, you should aim to understand what is token economics and how incentivization and rewards work. You should learn what are DApps and how they work.

Aim to get certified!

There are many paths and places one can go to get blockchain certified. Choose the paths easiest and most convenient to you. If you prefer classroom training, you can checkout Blockchain Academy’s Certified Blockchain Technologist (CBT) course.

CBT is currently one the most highly sought after blockchain certification courses out there.

Extra read: What the salary scales for blockchain experts?