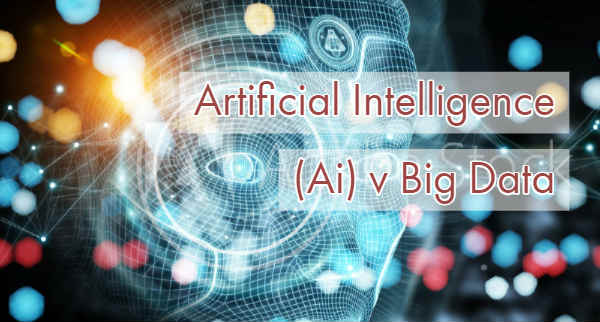 This is a strange enough question to start, so let me clarify. Putting Ai vs Big Data is not comparing like for like, even though they are often muttered in the same sentence.

A good analogy would be a steering wheel compared to an accelerator. They both do the assigned role very well. Nonetheless, together they become bigger than the sum of their parts. They are an integral combo to a larger machine.

The problem is that…

These terms get thrown around far too frequently. Usually by people wanting to sound on trend rather than being contextually correct.

There’s interest – This one thing the two technologies really do have in common.

The fact is these two are distinctively different, however, they can and do converge frequently to compliment each other. And so, let’s take a look below.

“The ability of a digital computer or computer-controlled robot to perform tasks commonly associated with intelligent beings.” – Britannica.com.

This is different from a traditional system whereby the computer acts according to its programming. Keeping within its limitations. Ai can interpret data and then problem solve based on those interpretations. Ai like a human is constantly adjusting and improving to accommodate change.

“Very large sets of data that are produced by people using the internet, that can only be stored. understood and used with the help of special tools and methods” – dictionay.cambridge.org

Big Data refers to a much different phenomenon. An old style of computing, not acting on results, just looking for them. Not only does it define large sets of data, but it also includes data that varies wildly and moves at high speed. Data sets can be structured data:- transactional data in a relational database, less and unstructured, such as images, email, sensor data. It has meaning within a strict context. Used to create analytics for pre-defined goals.

Data produced by social networks or the internet of things by itself is not enough to qualify as big data in the strictest sense. The data must also be part of a larger strategy. This leads to process automation, enhanced decision-making or other specific results.

The difference is this: In big data is a large volume of data that, when analyzed by an intelligent system, such as Ai, it produces usable analytics.

AI and big data work well together. The characteristics that define big data, volume, speed, complexity are simply too much for traditional computing.

And has an insatiable appetite. The greater the amount of data, the more an AI system can analyze, learn and evolve. Therefore being able to analyze bigger sets of data, which enables it to learn and so on. AI system if great at finding significant trends and patterns in big data. These might otherwise be misinterpreted or go undiscovered.

AI is about decision making and learning to make better decisions. Whether it’s evolving software, self-driving cars or examining medical samples. AI is doing tasks previously done by humans but faster and with reduced errors.

We have better, faster storage, such as solid-state drives and continuously improving processors. I/O (input/ output) operations are becoming very fast. This allows us to keep feeding the Ai machine faster than any human could process the data.

It might be that Big Data is the single biggest influencer of Ai and it’s rapid rise to power (was that Skynet you said?).

Without a doubt. Although inherently different, Big Data and Artificial Intelligence are partners for life.

Artificial intelligence helps create and assess large volumes of information provided by big data systems. The two are different, but they work well together.

This is part of a mini-series from Blockchain Academy to help people learn the fundamentals of modern tech terms.

If you enjoyed this, why not leave a comment below?

You can also check us out on our social media, just click on the buttons.