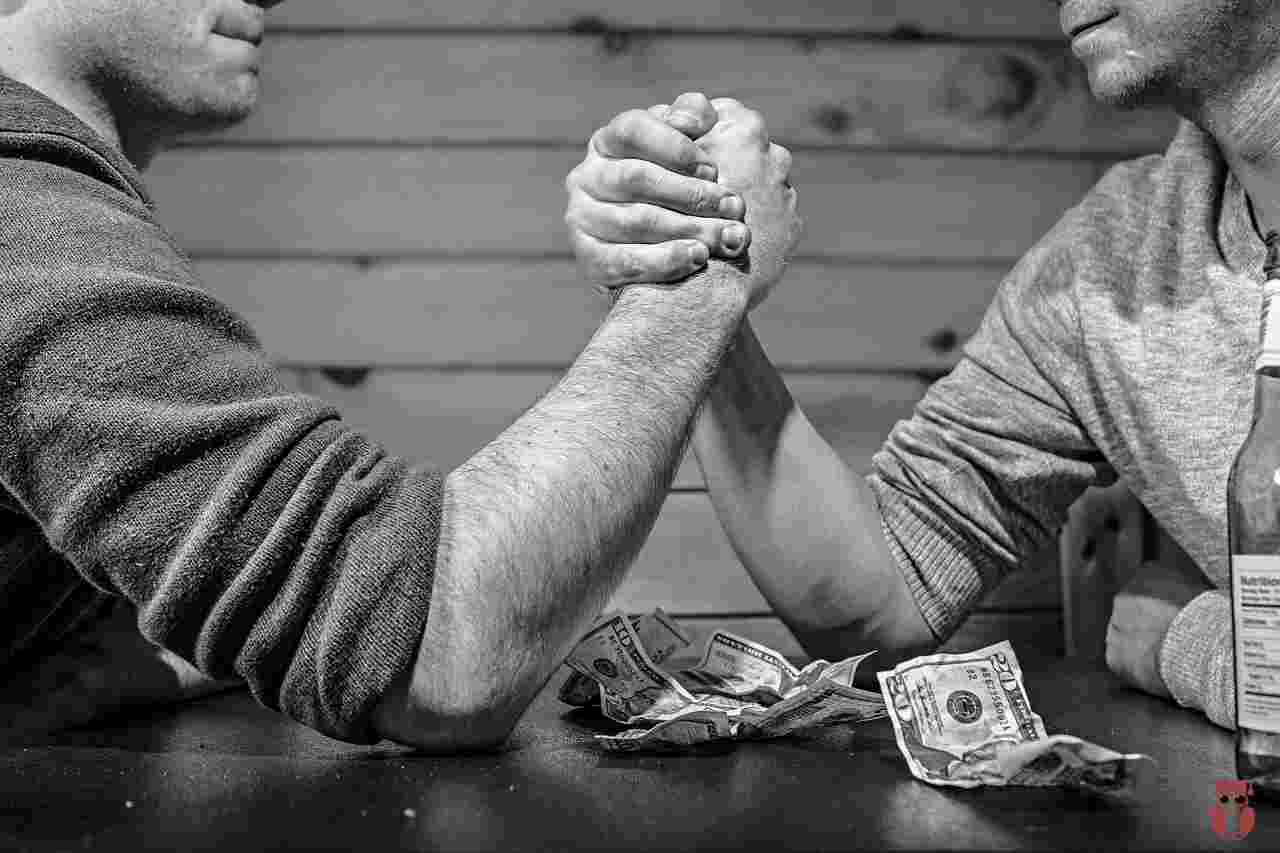 Ever since blockchain’s first and most powerful usecase, Bitcoin, shook the worldstage as a digital currency and a form of payment method, many parties began searching for ways to use blockchain in various other industries. In this article, I’ll try to break down the facts and show you how blockchain is right now, already, transforming the remittance industry.

First, what does ‘remittance’ mean? According to Cambridge dictionary, remittance is an amount of money that you send to someone. So long as you’re sending money to someone, whether digitally or via conventional means like Bank TT, Western Union, Moneygram etc. you’re part of the remittance process. 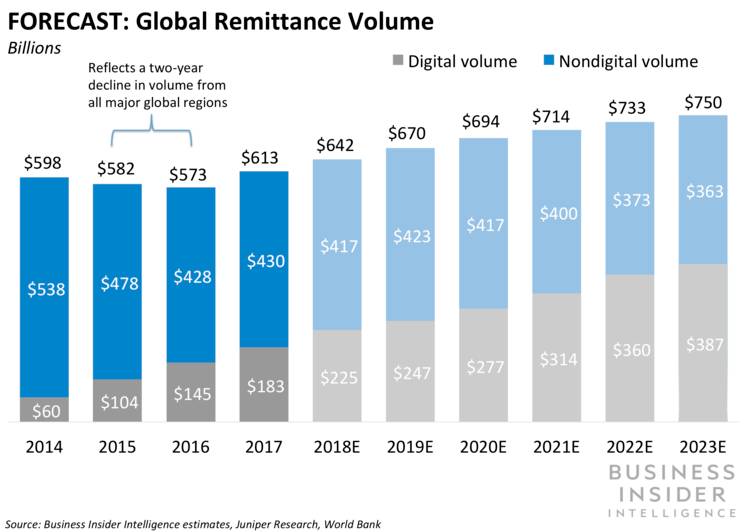 The chart above is from a recent Business Insider Intelligence report. The global remittance volume hit $613 billion in 2017 and is forecast to hit $694 billion in 2020. If you notice closely from the chart above, you will see the share of digital volume (grey bars) has been growing steadily upwards since 2014. This means the preference of users to use digital means of remitting funds is getting higher.

So, how does blockchain technology come in the picture of improving remittance? Blockchain presents us with a more secure way of saving and securing data, which can cut down on fraud, transaction times and processing fees. This may not necessarily be great news for traditional remittance and financial companies. Because, they often make their revenue by charging people to send and receive money. Is it up to them to decide where the market is heading? Nope! Usually the market decides.

If you’re constantly sending money internationally, you can end up paying a lot of fees. With blockchain technology, traditional banks are constantly facing a threat of losing out. The fact is the fees to transfer funds digitally is almost negligible.

For example, if you wanted to send MYR10,000 today to someone in Indonesia, you will probably end up paying MYR150 in fees. And this is just the one way charge. Apparently, when the recipient withdraws the funds from their end, they still end up paying additional charges to the agent or bank. This can come up to be a pretty significant amount for end users. They usually don’t have much of a choice, but to pay the fees. Well, this is going to change very soon. More choices are going to be available for users.

And how much would it have cost if you had transferred the same amount digitally via blockchain? Anywhere between $0.0007 to $0.0042 USD. This is via Bitcoin Cash (BCH) – the alternate Bitcoin that is cheaper and faster. You can check the live BCH transaction fee here.

So that’s why many feel, blockchain technology has the ability to flush out monopoly that traditional banks hold on the market. Think about it this way. If you can find a provider that charges lesser than the other, wouldn’t you use the cheaper service? Obviously right. That is why it’s in the interests of service providers to lower their overheads and charge lesser if they intend to stay in the game and retain a good proportion of the remittance market share else, they might as well close shop.

How long does it take for a standard remittance transfer across border?

Several factors influence the time it takes for funds to reach an overseas account. However, a standard timeline for most international transfers is about 1 to 4 business days according to .

You might be wondering, 1-4 business days for a bank to bank transfer is very long and you’re right. In these times of instant gratification, people want things done instantly. Having to wait 1-4  days can be a bit of a nuisance, don’t you think?

Digitally you could transfer funds and the beneficiary could receive the funds instantly. With Bitcoin Cash, if you transferred the same MYR10,000, you’d only need to to wait for less than a second to receive the money. How many seconds again? According to a CoinAnalysis finding, Bitcoin Cash (BCH) can do 116 transactions per second.

So, why can’t bank payments be instantaneous? The simple answer to this is fraud prevention.

With large volumes of payments to be processed through larger sending banks, necessary regulatory procedures mean that there are often delays with the expediting funds from the sending bank’s side. Transfers move in a series of steps which are purposely slowed down in order to reduce the possibility of fraud. Each country has rules surrounding the movement of money through its international borders.

Sometimes the banks receiving the transfer need to confirm the information and funds received as a fraud protection measure. While this is an important compliance measure and in the best interest of all parties transferring and receiving international money transfers, incoming funds may not be accessed by the beneficiary for another one or two days after the funds reach the receiving bank. Larger sums are obviously subject to more stringent, and as a result, lengthy controls.

Assuming we are looking at the current infrastructure of the common POW protocols like Bitcoin or Bitcoin Cash, the blockchain is unhackable (or at least fundamentally). But technically, blockchain is hack-able. I don’t intend to confuse you. Just know that, for the blockchain to be hacked, it would take a crazy amount of hackers all over the world, synchronizing the attack at one go (simultaneously) they’ll 5 times more the combined Google, Microsoft and Facebook servers to do the attack. And still, very unlikely they will succeed at the attack. I’m talking about hacking the Bitcoin blockchain.

Having said that, miners (the guys who use very powerful and expensive machines to solve the math puzzle and log the transactions onto the blockchain) could attempt to hack the blockchain via a 51% attack (aka double spend attack). So yeah, technically, it is possible but very unlikely anyone is up to it for now at least.

As you know, blockchain is a decentralized ledger meaning the same data is stored on multiple places (distributed servers). So if one server goes down, the other servers can serve up the data. Moreover, if transmitting funds digitally, you are not required to inform your bank or any bank for that matter. No need to fill up lengthy application forms either. On the blockchain, you can send any amount of payment anonymously, fast! 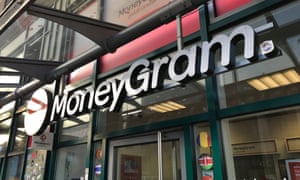 MoneyGram is one such company that has recently made great in-roads using blockhchain tech. They are banking heavily on Ripple’s blockchain technology.

The strategic partnership between MoneyGram and Ripple happened in June 2019. Ripple backed MoneyGram by purchasing its $50 million worth of shares with 10% stakes in MoneyGram. In return, MoneyGram partnered with Ripple to resolve digital cross border payments settlements.

So, what did Ripple offer MoneyGram? XRP based two main products, xCurrent and xRapid. They are being utilized for faster settlement of payments. Transfers via xRapid when t starts to be utlized will reduce cross border operating cost significantly and MoneyGram will be able to transfer funds instantly.  platform from last few weeks.

In the last few weeks, MoneyGram has been carrying out cross border transactions via Ripple’s xRapid program and so far, the CEO of MoneyGram, Alexander Holmes, seems quite pleased with the improvements Ripple has offered to his company. He firmly believes blockchain technology will change the remittance market for good. (watch the video below)

The global remittance industry is going through a shift, with nearly $700 Billion remitted globally in 2018. With the increased number of remittance and a preference shown towards digital transactions taking place, people are not going to stop sending money. They are just going to find a better, faster, more secure and cheaper way to do it.

India, China and Mexico are right now the largest receive countries (most number of people from outside the country sending money into the country). But sadly, two of these countries have heavily opposed using cryptocurrencies. Is this going to stop or stagnate the remittance industry? I don’t think so. What do you think? Share your thoughts below.